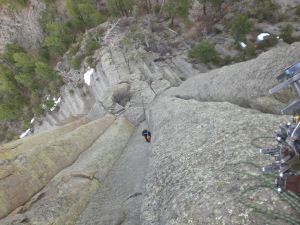 “I ought to be able to climb this,” I thought.

My partner agreed. “You got it, man,” he called from the belay.

I pulled sideways on the quarter-inch, diagonal edge which provided the only purchase for the picks of my ice tools on the overhang which I was trying to exit. The ice having proven useless, I tried to clear it from the rock and then ratcheted my way up, fishing for an edge to latch onto with my left tool. Before I found one, my right foot popped off the little bump. My knee took up the counter-pressure before the pick of my right tool popped off the rock.

Pleasantly surprised to find myself still attached to the route, I lowered gently back onto the little bump. Ambition drove me up one more time, with predictable results. 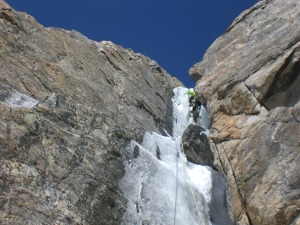 That attempt was my third on the route. We rappelled the three pitches below and descended avalanche debris to the floor of the cirque. As we coiled the ropes, a few tons of wet snow rumbled down a ledge system beside our abandoned line of ascent. We walked back to camp in silence, crawled into the tent and took our boots off.

“Well,” I offered, “we could always go climb at the Tower.” 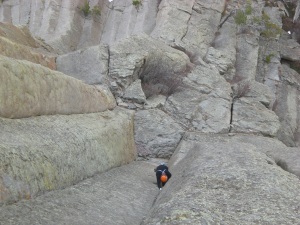 Few who climb remember the moment they started. The best most of us can do is to recall a time when we realized that we were climbers, but we were well into it by then. It sprouted as an inspiration regardless of the seed. As we acted on the landscape though, it changed our notions of what we could do and what we wanted to do. Aspiration took over from inspiration.

For most of us, ambition came close behind. Everybody’s had a list or project take possession of them for a stretch. In the worst case, our projects frustrated us, wore us down and made us quit, even if we finished them. In the best case, by the time we achieved our ambitions (or at last abandoned them), they had changed us so that the climbs to which we devoted ourselves no longer seemed so hard or so desirable as the routes we had discovered along the way.

Two Winters ago, an old man began to frequent our local ice climbing crag. He was a person of some renown, with many first ascents to his name in the ranges of North America. But, he had never climbed the waterfalls in the South Fork Valley of the Shoshone. He was training for the Valley’s steep cascades with miles of rolling ice between them, by climbing at the little cave we had nicknamed “forty feet of fun”.

His equipment was antiquated, but he wielded it with an ingrained ability reflecting many years of focused movement over ice and snow.  Still, he was slow and the length of his reach and the height of his steps betrayed the effects of 70 years of mountain travel on joints and tendons. He must have known what he was doing, so he must have known that his chances of getting up any of the climbs in the South Fork were extremely slim.

Finally, I had to ask, “What do you plan to climb in the Valley?”

A puzzled smirk spread over his face as he spoke, and I began to suspect. I’d felt the same expression of bemusement on my own face on occasion, after pulling a hard crux, usually on a “project”, when I couldn’t recall the moves involved or even how hard they felt. Then I would walk around for the rest of the day with the fading suspicion that maybe I didn’t climb it, maybe I fell off and even died, but had lost the capacity to notice in the process. Maybe the old guy felt that way all the time now; I didn’t ask about it or anything else, and I never found out how his trip turned out. 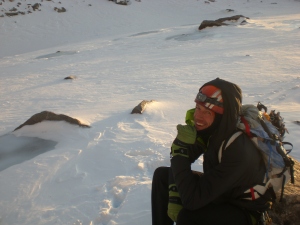 Back in the tent, both of us stared at the nylon floor for a few moments.

Then my partner lifted his head and replied, “You know, climbing at Devils Tower has been on my list for a long time.”