Speaking Essentially and the Root of the Problem

Let me tell you about unicorns. Unicorns are white-coated creatures, with bodies resembling those of horses. The unicorn’s hooves are cloven, and it has a single, spiral horn protruding from its forehead. The horn has a property which allows it to purify water and cure disease on contact. The animal itself has the ability to detect human female virginity and is highly attracted to the same, so much so that it exhibits a stereotypical set of behaviors in the presence of said females.

I can now make some meaningful statements about unicorns. I can say, for instance, “A unicorn is a unicorn if and only if it has one horn.”

I now say, “You should be able to recognize a unicorn if you see one.” Is that true? If it is true, what about it is true? That is to say: Does my statement reference a unicorn, the inherent possibility of a unicorn, or all that stuff I just said about unicorns? If it is the latter, does that necessitate anything beyond a bare, opaque unity?

Broken pillars cluttered the slope. Winter had come to this. False starts, collapsing possibilities, and ruined glory lay across the span of weeks between the first snowfall and the now-inevitable warm-up. I loaded the Soloist and began to climb. 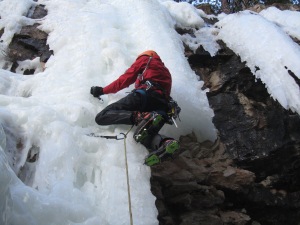 My swing was still good. Over the preceding couple of seasons, I had passed a threshold. My technical skills no longer seemed to deteriorate over the long warm spells. My performance on ice now depended almost exclusively on psychology, and my psychology today was fueled by anger.

Maybe this Winter was an aberration, but I suspected that it wasn’t. Things were changing; the climate was changing. I’d made a vow, back when rumors of soft and liquid Winters first circulated. When the day came that ice climbing ended, and I had no more use for my crampons, I’d clip them to my boots one more time and kick the nearest climate-change-denying Republican politician in the ass. I felt the time coming.

The column of ice I’d chosen was forty five feet tall, and beginning to deteriorate. It was a bit of a risk, and a little silly. It was so short, and it was wet and manufactured. I could hear cars on the road down in the canyon. I had followed a tourist’s Yak-trax prints up the trail to get here. I knew that I would find a PVC pipe leaking water over the cliff band at the top of the ice. There was no wild beauty or uniqueness to be found here. The pillar’s existence was all that recommended it.
The bottom took a light touch. It was wet and brittle ice. It tolerated only one, gentle swing per placement. I weight tested each tool before committing to it. I placed the crampon points in little divots in the ice, rather than kicking the spikes into the column. I waited to place the first ice screw until I was well off the ground. I had picked the spot from below, and it turned out to be as good as I had expected.
The ice improved after the first piece of gear. Above a small roof, it took a full swing. My anger transformed, clarified in the movement. Another ice screw and a few more swings led to a different game on the thin steps of low-angle ice at the top. I grabbed a tree and stepped over the PVC pipe.
I fancied another lap then. I was done being angry. I knew that the anger arose from fear of loss, and a deeper fear of loss than the fear of losing cold seasons. It came from the fear that I might someday no longer be a climber and find myself looking at the world from the same viewpoint as those cramponned-boot-in-the-ass-deserving politicians. It was a fear that I was losing. As more days like today passed, I felt more and more certain that I would not habitually trade an ‘is’ for an ‘ought’. I would not stop paying attention. I would not find myself trading real days for fears of an imagined future and its glories at risk.
As the ice receded, I would move higher. I would take notice of the boulders that had been hidden under permanent snowfields. My tools would scratch more rock. At last, I would walk up glaciers covered with rubble, arthritic knees aching, tottering on my piolet, and feel no different than I did at the top of the little pillar today.
As I set up the rappel, words from a Howlin’ Wolf song began to run through my mind:

May be I was still a little angry. Yeah, fuck them, another lap.