As I prepare to move to the desert, I’m going back to do the climbs that have shaped me.

I am climbing them with my sons. I will not imply a goodbye to my friends and partners over the years by involving them in the project. There is no goodbye for them.

As I return to the old routes, I am finding them suddenly easier. I think it is because I am finally climbing them without any surpassing ambition.
I am not climbing them to become a better climber or to get to the next, harder route. Instead, I’m starting where one always ends: climbing to make the next move.

And as I do so, I’m finding just how deeply those routes have etched my nerves, my bones, my ambitions, and my morality.
They’ve given me technique, tough fingers, persistence, acceptance, joy in small victories and peace in grander desires.

Actually, I’m finding that I can’t say goodbye. I can’t surpass those routes, anymore than I can ever really untie from a partner. They’ve made me, and I will take them along to the desert.

Cosmological arguments are prime examples of the corrosiveness of apology. These are arguments by analogy. They state that, for a primary or non-contingent cause to participate in subsequent causal relations or contingencies, it must be like those subsequent causes or contingencies, though it is not a subsequent cause or contingent object itself. From this likeness, the arguments then deduce other qualities – purpose, intent, intelligence – as necessary precursors unique to the primary cause or non-contingent base. Such deductions are not valid. The ‘uncaused cause’ in question is, by definition, essentially unlike and independent of subsequent causes and contingencies. To examine the problem from another perspective, there is no way for us to make sense of the phrase, “before the beginning” or anything that follows it. The realm of possibilities is certainly wide open – one assertion is as valid as the next – but they all remain unjustified assertions. If God created something without being beholden to the dictates of causal relations himself, i.e. God was not in a specific location relative to the event, God’s identity was not altered by the event, the event took nothing from god, then can we claim to know what God did? Can we claim to say God ‘did’ anything as we understand ‘doing something’? What we are claiming is that a miracle occurred, and the claim that a miracle occurred is a hermetic statement. The problem with all theological apologies, as in the Cosmological ones, lies in the habit of deducing from analogies. The practice implies that there is not just an explanation from God, but that there is a science of God. It implies that there are things which we can deduce about God’s workings. It’s a tempting way to be. It seems so decisive and satisfyingly self-righteous. But it’s ultimately limiting, fearful and inconsistent. The above is why, in a nutshell, theologians resort to the sensus divinitatis, whose only explanation is – the sensus divinitatis. It is the only sensible option. 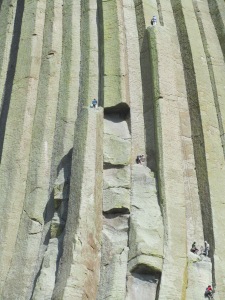 “I was an idiot,” he said.
We looked up the thin crack dividing two, hexagonal pillars. The wind buffeted us, seated as we were on the sheared edge of a broken column-top.
He proceeded to explain that the route which we regarded had been the site of one of his ‘big whippers’. He’d had a proper ‘big whipper’ era when he was climbing hard, during his second decade.
In the case under discussion, he had been leading the route in the heat of the day. As he stepped up to the crux, a strenuous move involving counter-pressure, he passed out.
He looked like a skydiver in the fall, his limbs extended from his torso and flapping slightly against the rising airspeed. At least, that was his belayer’s description. He only remembers lurching back to consciousness as the rope came taut.
Now, the shade of the big whipper haunted the narrow split in the rock above us. I looked at his face. He would hold the rope if I climbed it.
He would do his best to shake his way up when I got to the top and yelled, “On Belay!”
But there were other mice to catch, and I knew where this one lived. It wasn’t like he didn’t want to climb the route. It might be the route he wanted most. It simply needed to ferment a little before he could take it in.
We rappelled back to the cozy ledge on the Southeast shoulder. 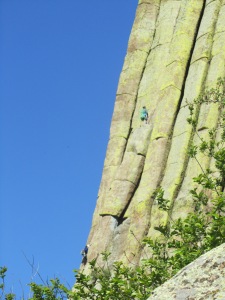 Above the little garden of juniper and gooseberry perched on the sheer side of the Tower, every line was occupied.
A team from Boulder, CO was climbing up to the awful hanging belay on Soler, a climb every bit as good as any at their home crag. A pair from Montana was queued up right behind them. We would watch the two teams try to share the bolts at the unsupported stance as we left. At the other end of the ledge, a guided group of four was climbing the easiest route from the ledge, aiming for the summit.
The trip back to the base of the Tower involved a scrambling traverse. Most of the time, it was done with a single-layer safety system – the finger strength and caution of the climber. But the consequences of a mistake or mishap, like a falling rock, a seizure, cardiac dysrhythmia, etc., would be fatal. Having seen its vulnerability to the shade of the big whipper, such spooks preyed upon my friend’s mind. I paid out rope for him until he was safe, threw my end on the ground and followed.
Back at the base, we packed up and moved around to the West face. On the way, we passed the viewing tubes – sights pointed perpetually at the stake ladder constructed by two local ranchers years ago as a publicity stunt. Nobody was paying attention to the tubes. In fact, we saw few pedestrians until our way departed from the main trail.
There, my friend exchanged a few words with gawkers who shook their heads at what was, to their eyes, the modern equivalent of stake ladder activities. But I was already looking at the West face. We had not escaped the show. All of the prominent routes were occupied, some doubly. Perhaps the gawkers were partially correct; it was absurd.
We started up the boulder field. The day was too nice; we couldn’t turn away.
We found an open line, or at least, a line where we could establish priority.
As we sorted ropes and gear at the base of the thin crack, another team completed a nearby route. After they pulled their ropes, they began discussing further options, a little too loudly. One of their options, as it turned out, was our line. Usually, I would demur to visitors, but not in the midst of the carnival. We exchanged the usual pleasantries which allow etiquette to be enforced. We suggested a nearby route. They had some initial misgivings, but soon quieted down as the climbing began.

I was already past the wider sections of our line by then. I was confronted by a series of challenges – three or four hard moves, followed by a secure stance, each set harder than the last and ending right before the anchor bolts. I placed a small aluminum wedge or camming device every four feet or so on these sections.
Part of the trick is knowing the difference between placing protection which safeguards life and limb, and placing protection which bolsters the psyche. Part of the trick is learning not to care too much about that difference. I made it. Now it was his turn.
With the rope ahead of him rather than trailing behind, the haunts fled and he moved smoothly. He even took a fall in stride. As I lowered him, he told me how good he felt about the climb. He told me how good he felt about the whipper-era too, in retrospect.

We pulled the rope and left the particular carnival at Devils Tower. I dropped him at his house and returned to my own. I would do a few more days of work in the medical clinic, helping people postpone their fate, before I got to go back to the Tower.
As I pulled into the driveway, my little cat was perched on a rock by the walk, intent on something in the grass. She was well fed. If she caught a mouse presently, she would not eat it. Cat activities were no better than stake ladder activities, or climber activities, or perhaps even tourist activities. I started to shake my head, but she looked up. Her puzzled expression stopped me.
“And?” it said, “There are mice to catch.”