Along with The Fang, Bridalveil, Kamps Crack, and The Beckey Route, Genesis is a very tired route name. Everyplace has one, including Sedona.

It is a little more relevant in Sedona, because the name graces a route on the walls above the crazy-ass Chapel of the Holy Cross. In the land of the Vortex and burnt-Hippie spiritualism, The Catholic Church just had to get its two cents in. It built a huge, coffin-shaped edifice into the red rock, with a cross from floor to ceiling on the end.

And Genesis fits. It is the beginning of a series of routes across the Church Wall.

The approach is not great. You could die. It wouldn’t be easy, but you could.

The belay ledge is spacious and picturesque.

The climbing is good. 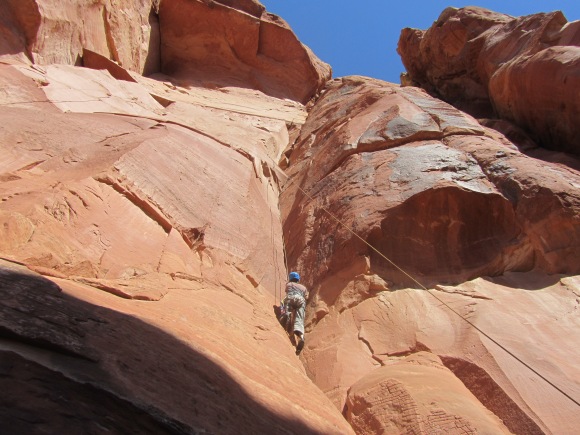 With everything from 0.25-4 Camalot sizes. There is a second pitch – see all the loose blocks and the knife-edge flake above the anchor? We did not do that.

Genesis is worthwhile, especially if you approach by climbing Easy Rider on the other side of the Watchtower formation, and simply walk over to the start of Genesis from the anchors.

If you believe that your thoughts, feelings, and motives have – or are – explanatory causes, then you are a determinist.

You are also a physicalist.

If you think that God is a person with thoughts, feelings and motives similar to your own, nothing changes. You remain a determinist and a physicalist. God just joins the club.

I received a gift from the congressman today.  He sent me a survey, or his toadies did. I don’t recall how I got on the NRCC mailing list, but it’s no wonder. After all, I am a white guy with a decent income who has lived most of his life in red, rural America. Who can blame them for assuming that I am one of them?

But I am not one of them, In fact, I am a sworn enemy, and this survey is a perfect example of the reason why I despise those Trump-lovin’ tapeworms.

Really, the survey isn’t a survey at all; it is a push poll. It asks a set of questions designed  to elicit and solidify emotional responses to key terms.

Of course, there is donation request at the end of the thing, and I am pretty sure that enclosed checks are the only pieces of paper which survive “data extraction” to feel the sticky caress of the NRCC toadies.

Anyway, this intellectual hairball must be seen to be believed, so here goes:

Question #2: (I’ll edit out the dry bits) Amnesty is not the correct path for immigration policy.

The possible answers are along a scale from “Strongly agree” (the Right answer) to “Strongly disagree” (the naughty, un-American answer). But what the hell are they talking about? Has anyone proposed amnesty as the path for immigration policy? And what is amnesty anyway – a path to citizenship, a new class of work visas, anything short of a human catapult at the border wall (God bless its steely heart)?

Question #3: The Constitution is not a “living and breathing document.” Its authors had a clear vision that judges must follow.

Huh? Doesn’t every jurist think that they are trying to be faithful to the vision? I guess they mean the Right vision.

Question #6: The IRS needs more oversight from Congress for its extreme targeting of conservative groups.

Speaks for itself. They dropped the pretense at this point.

Question #7: Congress should abolish the death tax that forces our children to pay taxes on their rightful inheritance.

Don Jr. and Eric may pay that tax. My kids will never pay it, nor will the children of anyone I know.

Question #8: The capital gains tax should be reduced to encourage entrepreneurship.

When did you stop beating your wife? Well?

Question #9: Radical Islamic Terrorism (my two cents: They should go ALL CAPS next time. It’s what they want anyway) is the biggest threat we face in the Middle East.

In the Middle East? Nope.

Question #13: Congress should cut Obama-era regulations that have created unnecessary obstacles for people to open and maintain businesses.

To maintain a consistent standard of efficacy, Our Party should also push for funding of weekly prostate biopsies for all its members of congress.

Question #21:  Republicans must reverse Obama’s war on coal that has damaged Ohio.

Ohio? I suspect that Ohio has bigger problems. Don’t they have a Superfund site or two?

Now, politicians have always lied and manipulated to advance their fortunes. But tactics like the mailing above go well beyond manipulation. They are conditioning.

“Bark, drool, and puke up some cash for our sustenance on cue,” they say, “and you get a yummy bit of certainty, a morsel of reassurance, and a warm pat of belonging.”

Objective hazards are everything else. They include things like loose rock, weather, avalanches and equipment malfunction.

Objective hazards may be avoided. One may choose to stay home if the weather looks bad.

Objective hazards may be engaged. One may choose to go out despite the 110 degree temperature, but choose to go to a shady crag at high altitude.

Objective hazards may be accepted. One may stick with the plan despite the blazing heat and just be prepared to climb poorly and suffer.

What one may not do with an objective hazard is control it. It should be obvious that weather, snow, loose rock, misguided guidebooks, and other people are all objective hazards.

We count on others to behave in certain ways and blame them when they do not. We don’t make our best estimate of another’s capacity, plan accordingly, and then accept what we get. We expect performance according to role, which is characteristic of subjective hazards, at least when they do not prove hazardous.