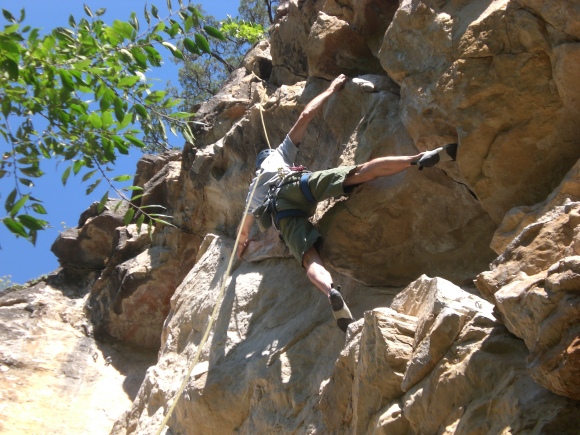 Setting up for the finger lock.

The endless cycle of suffering which is death and rebirth. This has been the Samsara Summer. It is a story familiar to every climber. Just as the season gets rolling, the rain starts, a partner gets hurt, work asserts itself and the momentum dies. You’re left training, but it isn’t really training. Training implies a purpose, and soloing on a top rope and doing pull-ups has no end-point.
For me, what is left when the cycle turns is Tongueless Wonder.
The route is a Pete deLannoy creation at the most unfashionable crag in Spearfish canyon. I don’t know if Pete put this thing up in the absurd, power-drill-on-lead style for which he was famous. I kind of doubt it, though it would be fitting. The whole thing is ridiculous. It is a horrible crack-climb, with as many pockets and pinches as it has hand-jams and finger-locks. It is a horrible sport climb for the same reason. Furthermore, it is an ethical disaster. The bolted crack could be protected with clean gear, but only as a nightmare. The route is only twenty meters; most of the time on route would be spent with only one piece of gear between yourself and the ground. Much of that gear would be placed blindly due to the serpentine nature of limestone cracks.
I’ve lead it on the bolts, so I’ll never have the clean, first lead on gear. What I’ve got left to me is that most absurd of all climbing achievements: the headpoint. Headpointing is the thoroughly rehearsed lead, with the moves and gear placements worked out and practiced in advance on top-rope. In its own peculiar way, a headpoint is quite alarming. During the rehearsal, you fall off. Denial, the onsight climber’s friend, becomes unavailable. One is motivated to get the route wired. 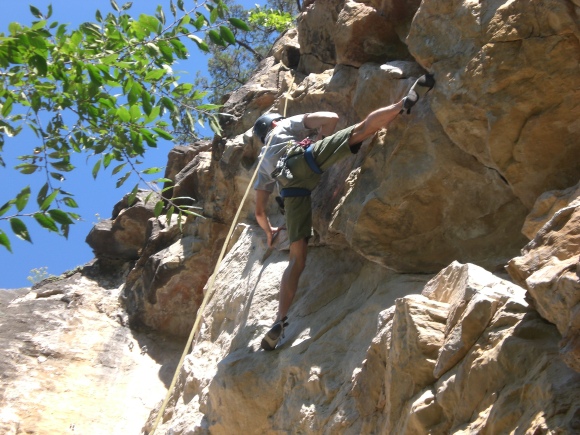 I’ve been working on this one for, four years, five maybe? I’ve been almost ready several times, but Fall caught me and I had to start over the following year. Perhaps the situation is closer to the Greek version of an endless cycle of suffering – Sisyphus in the underworld. Except, I don’t have Zeus to blame. I’ve chosen to push this, but it is finally an excuse. I like the climb, and that’s the only truth. Climbing it on gear is an arbitrary purpose which keeps me coming back to the route with renewed motivation. 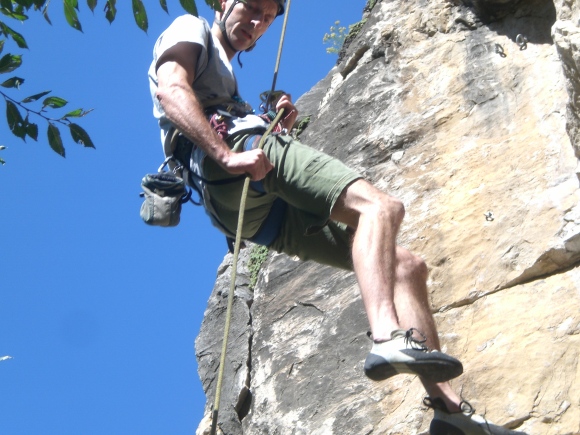 Next lap coming up.

It’s pointless, but so is climbing in all its forms, and work, and every one of our silly struggles – Samsara. We still do it, though. We’re groomed for this game by our heritage. We can’t lose, because points and pointlessness don’t stick to us; the truth is we like the doing and that’s all. Just like Sisyphus, who I believe out-foxed Zeus in the end. Maybe not on the tenth lap, or the fiftieth, but maybe by the thousandth or ten thousandth, old Sisyphus was into it, I’m sure. Then it didn’t matter whether he ever got to the top; he’d beaten Zeus and escaped the cycle of suffering.

One thought on “Samsara”