Hammerhead (ham-er-hed) n. 1. the part of a carpentry tool used to drive nails 2. any tool’s feature designed to impact an object 3. metaphysically, an implement used to achieve the wielder’s intent through main force 4. (slang, common parlance) any person with a modus operandi analogous to that of the tool, usually expressing the speaker’s contempt 5. (slang, among climbers) any person with a modus operandi analogous to that of the tool, usually expressing the speaker’s admiration and horror.
A hammer has a sort of minimalist beauty. It is clean. It has a singular answer to all challenges. It cannot – it will not – be mistaken for something which it is not. The beauty of the hammerhead mentality is the same. It forges a pure, guileless path in the world. It wakes each morning without ulterior motive; it pounds through each day without ulterior motive.
The psychological dynamic at issue has always been part of the human repertoire. The most famous, historical hammerhead was Alexander the Great. I’ve heard people question why anyone would ever follow such a jackass, as the blustering fool marched his army across Asia Minor to no good end. He wasn’t a blustering fool though, he was a hammerhead and I’m sure his men caught a serious case of Special-Sense-of-Purpose from him. Sure, he didn’t need to conquer India. He was simply out conquering, and India was next. Likewise, cutting the Gordian knot wasn’t a clever, if arrogant, statement or “out of the box” thinking; it was a natural hammerhead move. At the end, nobody was worried about that damned ox-cart anymore, and they could all get on with the conquest.

In fable, Aesop’s grasshopper, from The Ant and the Grasshopper, is a hammerhead. But only in a certain version of the fable – the one where the grasshopper is not a dissolute slob, the one where he’s just really, really into dancing and singing. It’s the version of the grasshopper with which we can sympathize. It’s the version which exposes the potential meanness of the ant’s viewpoint.
Their noble clarity is why we climb with hammerheads, why we train with them, and why we stick around to pick up the pieces. Because the unaided exponent of the hammerhead mentality is doomed from the start. Nature is bigger than us, and that’s a fact. Some routes will not go. There is a limit to strength, reach, and flexibility. A person can only go without sleep, food and water for so long. You can’t always just push through.

It’s a flaw as well as a merit of the hammerhead mentality that its hold is unwavering by nature, on the outside and on the inside. Once the hammerhead is engaged, it’s too late. The focus takes over and won’t let go, even in the face of impending doom. Nevertheless, we need the hammerhead mentality. At the very least, we have some unique lessons to learn from observing it in action.
The hammerheads have two things to teach the world. The first thing is: they show us how lucky we all really are. We are much more in command of most situations than we imagine, and we shouldn’t always act so surprised about it. If we just set aside our doubts and fears, we could often do more than we imagine. The odds are naturally in our favor.
As climbers, for instance, our eyes are drawn first to the peaks rather than the smooth rock faces. Our digits are shaped to hook over edges and close around corners. The knobby bits at the bottoms of our brains are really good at keeping us in balance. Our fingertips have little ridges on them. The game is rigged in our favor. We just need to know how far we can push our luck, and of course, that’s the problem for hammerheads.
They need to direct themselves at manageable projects. They can’t be allowed to build up too much momentum. In short, they need help, by means of another behavioral model to back them up and good counsel. They need ants. Not the nasty little ants in the bad version of Aesop’s fable, just waiting to say, “told you so,” and slam the door in the grasshopper’s face. They need the clever ants, the ones with some tricks up their sleeves, who can appreciate the merits of the hammerhead mentality and are prepared to compensate for its flaws. This isn’t pure charity on the ants’ part either. 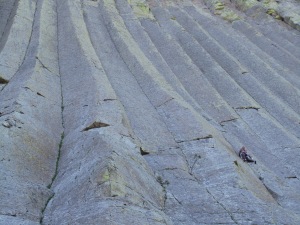 Focus is a necessary virtue, despite the requisite sacrifices. A person fixated on the summit, the anchor chains or the next hold has abandoned their self-control in order to push through. On occasion though, nothing else suffices. We all can – indeed we must – slip into the hammerhead mentality from time to time for good and ill, even if it’s not our policy. That’s the hammerheads’ second lesson. Even a good ant may need an ant in their own head now and again, if not a doppelganger at the other end of the rope. Being the ant at the other end of the rope is just good practice.