I pirouetted around the man in the tiny atrium and past the slowly closing glass door. It was an unusual way to enter McDonald’s, so I thought at first that he gave me an odd glance in return for the odd maneuver. But as I joined the line, just before the end of breakfast service on Saturday morning, he looked at me again in the same way. Then I recognized him, as well.
“Hello,” I said, extending my hand.
“Hey,” he smiled, “here to climb?”
“Yep,” I replied, “Good to see you.”
“Likewise. What are you going to do?”
“Joy After Pain.”
“Oh,” he nodded, “That’s huge this year. Well, have fun. I’m shopping with the kids today, so…”
“I know how that is,” I said, “Good luck.”
He didn’t seem concerned about the time, but neither was I. We were coming home in the dark. We might as well live it up.
We ate our sausage and egg biscuits on the way out to the Valley.

It had been cold in the Valley. Ice had formed back up on the North wall, and it would stay for the day, at least. It was cold, with temperatures in the teens. It even looked like Ovisight was accessible. We looked to the shade though, to the South wall of the Valley, where the ice would be old, cold and brittle. It was formed as well, though the base of our objective tapered ominously. We did not care. We had our decision, and we had the word, and the word was “huge”.
Two other cars sat in the pull-out across from the ranch’s mailbox. One party was visible on Moratorium.
We did not see tracks on the intermittent snowfields on the way to the wooded slopes below our objective, but we met the second party at the tree-line.
“We have guns,” the older fellow joked.
I wasn’t going to race them to the base of the climb. We were coming home in the dark, and there was room at the base to stand and wait if need be.
We walked with them for a ways, up the steep, left side of the drainage. Then, they broke right and fell slightly behind.

I could not see them as we rounded the last, bulging shoulder of the streambed and saw the first pitch fully revealed. Still, I heard them, although I could not make out the words. The tone was plain enough: dismay and disgust. The base of the pitch was a thin, tapering pillar – translucent and gray. I wasn’t deterred. Somehow, “huge” had lodged in my mind, and it made the sight reassuring. The pillar looked well rooted, despite the fact that I could wrap one arm around its connection to the ice sheet below it.
Before I started up, I hit it with the side of my ice tool. It didn’t come crashing down and it produced a deep, resonant note. It would be fine, if I just didn’t hit it too hard, or at all. Fortunately, it had plenty of feature – blobs, divots and candles. I tapped and hooked for thirty feet up to the point where the ice attached to the cliff face and it was safe to place a screw.
The angle eased soon after, and the primary difficulty became the hard and brittle state of the medium. 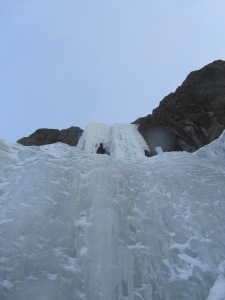 We anchored at the very end of the rope and climbed a deceptively steep and rotted pitch above. There was a short walk with a solo step and then a short, solid roped pitch.
We climbed another ice ramp and finally stood beneath the two-tiered, final pitch. It was four thirty in the evening.

The next day, Mike’s breakfast sandwich would have its revenge, and the fish hatchery climb would melt out before we arrived. The pitch at Leigh Creek would seem too anticlimactic. We should grasp at every last foot of climbing, being practitioners of what is possibly a dying art. But we wouldn’t, because it would be art for us alone, and a ridiculous thing or a cheap thrill for the rest of the world. It must be right for us if it were to make sense at all.

We would save the last pitch of Joy After Pain too. It was blue and intricate, and flowing with water – huge. And it was in the shade, so it would be there when the sun-side languished. We would come back to climb it in the light.