The Sad Side of the Road

Being awake is swimming around in a lake of the undead.

And the undead are like a bunch of friends who demand constant attention.

Demanding constant attention, will only  lead to attention,

And once they have that attention, they’ll use it to ask for attention…

The white truck was about a foot from our bumper. I looked in the mirror at the pick-up trucker. He wore mirrored aviators and had his head cocked in an expression of bored annoyance which only the rich white folks can pull off. I gave it right back, followed by the finger.

Over in the driver’s seat, my son was oblivious to the exchange. He was too gripped. He was driving the freeway for maybe the third time ever, and had shifted into survival mode on the entrance ramp. The truck pulled out and blew past us. At least he passed on the left. As the truck cleared our flank, I glanced around its tailgate at the Eastbound lanes.

On a Tuesday morning at 0630, the Eastbound side was the sad side of the road. Thousands of people parked in the lanes, distracting themselves with cell phones, the condescending humor and invective of AM radio, or their own expressions of hatred towards the filthy slacker stalling traffic in front of them. I wondered, as I had countless mornings before: Where were they all going?

Most were off to willingly trade their lives for money. Some were probably going to try to game the system, like us. Maybe they played ball in a league, or played a musical instrument, or read books and then thought about what they read. I was pretty sure that the gamers were a tiny minority. If there were lots of those people, then the sad side of the road would not exist in the first place.

I had thought about the sad side of the road on many mornings, as I drove to work. I rarely got to see things from the passenger’s seat though, and that Tuesday morning, from the passenger’s seat, I began to consider my own side of the road, too.  I wondered where the jackass in the truck was going. He was in a hurry, so he was going to cash in somewhere.

Maybe he was going to buy a ride on one of the hot air balloons which hovered above the dirty thermocline in the near Northern suburbs. I could see a couple from the freeway at 0630 on a Tuesday morning. The trucker seemed like the sort who would enjoy a balloon ride. He seemed ambitious, and looking down on the anthill from just above its pollution was good for the ambitious, especially if it was just a peek, and a costly enough peek to exclude the losers.

I knew where we were going. We were headed for Sedona, to climb a sandstone pinnacle. It was a traditional climb, which means I had to carry and place removable anchor pieces on my way up. I preferred traditional climbing to sport climbing, where the routes were protected by in situ anchor bolts.

I preferred traditional climbing because it got right to the point. Helmuth von Moltke the Elder was right: No plan survives contact with the enemy. In climbing, we sought to verify the corollary to that bit of Prussian wisdom: If you wanted to live, you couldn’t defer or hold back. You could not buy your way through. No faking allowed. When you placed your own gear, the corollary was on you right away. If you clipped bolts, it didn’t hit until you maxed out.

When I glanced back over at my son, he looked a little more relaxed. He had picked up driving quickly. I had tried to work on strategy with him. I hoped that he would continue to drive defensively and remain focused once the operational routines of driving became automatic. I hoped that he would not end up like the trucker. Even just being a gamer was better than that. 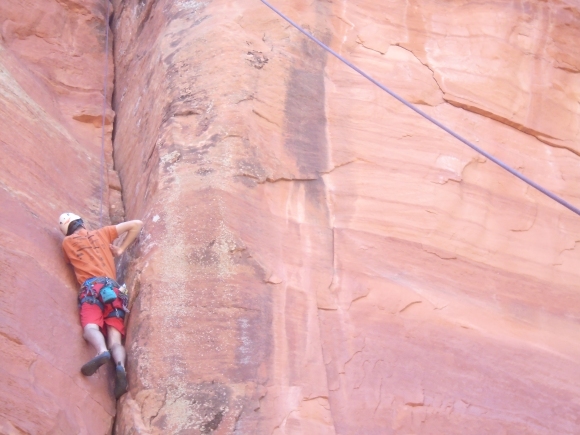