Worried About That Gag and Dog Collar in Your Closet? Let Me Show You Something…

As I was shopping for knee-pads, I realized: I might have a problem. It was clear that I had developed an unhealthy appetite and here I was, about to feed it. The pads would allow me to wear lighter clothing and so carry on climbing wide cracks into the heat of Summer. 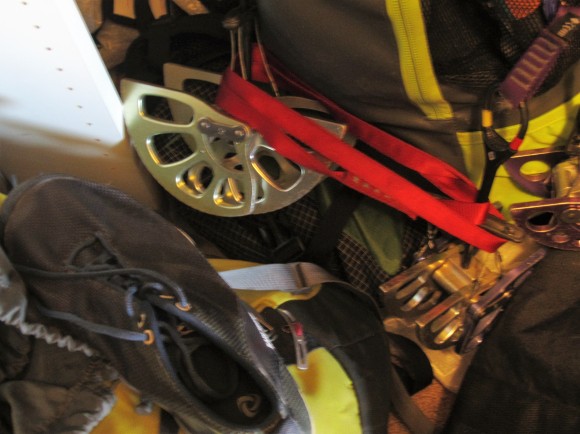 I fondled one of the expensive pads. It was real leather and neoprene. Clearly, the expensive pad was superior, but it would get destroyed just as fast as the cheap ones. My poor technique limited the pad’s lifetime, sure. However, the nature of my needs did too.

Because, there is a beautiful variety of wide-crack climbing. I refer to the art practiced by people like Luebben, Scarpelli, Randall, Jackson, etc., involving maneuvers like Levittaion, the Kick-Through, and the Hand/Fist Stack. The technique involves only limited insertion of the practitioner’s anatomy into the gap in the rock during any one maneuver. The movement is improbable, powerful and gymnastic. 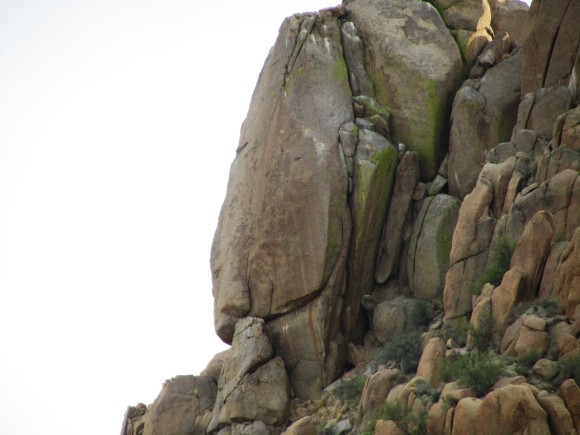 I am incapable of such feats, and furthermore, they are not what I want. I’ll admit, I am after something to fill the hole left by separation from (relatively) easy access to ice. I want a fight. Just like some people cannot feel loved until they have had their bottom spanked, I am only truly happy with climbing when I have done something unlovely, daunting, and bloody.

It isn’t that I don’t enjoy a technical or purely physical challenge, it’s just that I want the stuff just beyond. I want to have to hold it together and be stopped, if I am stopped, by the total exhaustion of everything at my disposal.

The kind of wide crack that delivers for me, does not abide expensive knee pads. It is too abusive. You have to climb into it, and the whole trip resembles nothing more than an edentulous dog trying to chew up a bone. It is not pretty. Perhaps it is even obscene. I just can’t help it, though.

Realism in the Time of the Troonians

My son pointed at the massive dwelling crouched on the mountainside below us.
“Just one mortar round…,” he said, “Wouldn’t you like to see it?”
He was having some trouble adjusting to our move from rural Wyoming to the swanky part of the Southwest desert. He took little comfort in my assurances that all the car washes and golf courses would soon (in geologic terms) suck the metropolis dry and leave its snotty, effete denizens to perish on the parched dust like beached fish gasping for water. Even the fact that we were hastening the demise of this false oasis by our presence, did not satisfy him.
I, on the other hand, felt a certain degree of fulfillment from participating in the great blooming and dying-back.
But, I had to admit, I would like to see the house explode.
It was offensive to me, for a number of reasons.
The house was part of a cluster of housing developments and country clubs which had sprouted below a small range of granite crags north of Scottsdale. All were emblems of wretched excess, with the concomitant nomenclature: “The Estates at Xanadu”, “Regent Manors”, and the like. I had taken to lumping the lot under the oddest of their labels – “Troon”.
It wasn’t just a funny name; it designated a private golf course and a gated community, so it represented the entire syndrome nicely. The homes all cost millions, and they sprawled. The square footage stood for the worst aesthetic arrangement which our society had to offer, which was the joy of possession over the joy of experience.
Worse, though, was the history of the Troons relative to the surrounding crags. They had posed a serious risk to climbing access.
Most of the problems had been resolved with the creation of Pinnacle Peak Park. However, it was the idea behind the threat to climbing access that was offensive. The threat implied an equivalence, at least, between the Troonians’ appreciation for the crags, and my own.

Clearly, that was not the case. For them, the rock constituted part of a lifestyle badge. It was kind of nice to look at, and living beneath it gave the Troonian status. He could feel a little removed, and above it all, like the proud peak in his backyard. He didn’t want climbers ruining the image of the rock, much less disturbing his sense of splendid isolation otherwise by yelling ‘off belay’ during his afternoon tea.
I understood the beauty of distant peaks, too. But I also knew the beauty of the rock close up, under finger and foot. It was something more, and forever unavailable to the Troonian. He had no right to impinge on my more complete and superior aesthetic.
But how could one convince a Philistine that he was a Philistine? The problem was intractable. He would always have some rejoinder about a set of related values which justified his being a rotten little twerp. In this case, it would be property, the rights of exchange which came with hard- earned (hah!) wealth, and liberty. Forget the fact that he could not own the rock in any meaningful way. He had to either bring it down or squat below it. Forget the fact that his array of goods for purchase was already limited by the aesthetics of his society, which found it distasteful, for instance, for him to buy humans for any purpose. Forget the fact that he had already sacrificed the greater portion of his liberty in the process of becoming a Troonian (the chances of one of those poor, business-softened bastards even scrambling up the Pinnacle Peak approach trail, were practically nil).
The Troonian’s frame of reference could not encompass my own. He would never be able to appreciate the inferiority of his aesthetic relative to mine, and so he would continue to hold his own values precious by mistake. If ethics boiled down to the reconciliation of intentionality and motivation with truth, there could be no ethical resolution between myself and the Troonian. There was no commonly held truth between us.
Traditionally, that class of differences has been settled with mortar shells. The Trooninan’s annihilation would be a consensual truth. But it would be a superimposed truth, and an impolite way of changing the subject. It missed the intention, since it was no longer about me and the Troonian and our aesthetic differences, but about the prejudicial elimination of those differences. And it was discordant with my motive, which was to appreciate the climbing experience.
The relevant truth was that the Trooinian and I valued something about the peaks, and generally valued our valuations in a similar way. That last bit was the truth that our difference was about, and it was not the truth to which my impulse to see his house explode and to hack him to death with a machete as he stumbled, flaming, from the wreckage, appealed. It did not feel as good, acting on this second-order stuff – the valuation of values – as would a good hacking which made its own truth. I could see how one would come to think that feeling anything about a moral decision was a red herring. And from there, I could see how one would come to think that moral decisions had a real and objective life of their own.
I looked back at my son.
“Hmmm,” I answered, “I’d rather climb the Y-crack.”
And I would. I would rather climb, keep my voice down, leave the crag before dark and choose to see the little McMansion at our feet as a quaint feature of the landscape. Hell, who knew? Maybe the squishy critter in the cage below us was really an old dirt bag who’d hit it big in the lottery and looked up at us with a sense of appreciation and nostalgia.
Maybe, but I doubted it. 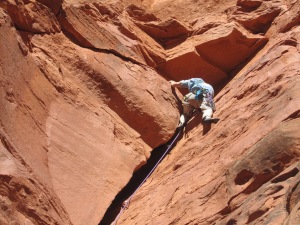 Besides, there is always something better in Sedona