That’s a Thing? I Thought People Just Did That ‘Cause They’re Nasty. 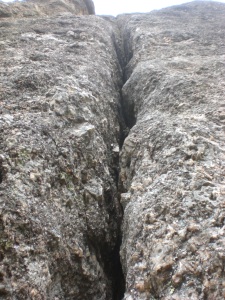 Like so many other aged and out-of-touch Americans, I learned a new word this Summer. No, I’m not talking about “sequestration”; I’m talking about “twerking”. Thanks Miley. 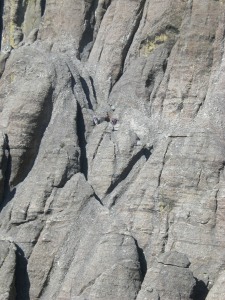 Chris wishing he was off-width climbing – or maybe twerking – instead of guiding,

My first take on twerking was the standard one for the aged and out-of-touch regarding any cultural innovation – “That’s ridiculous!”. I’ve no right to heap scorn on the twerkers though, because sometimes, I climb off-widths.

Trying to stay out of the foot-wide crack.

Actually, these are the times that I climb off-widths – when the weather is cool enough to wear clothes with full coverage, but not cool enough to justify breaking out the ice tools. Coverage is a big deal because an off-width is any crack wider than a climber’s clenched fist. In other words, to climb an off-width, the more pampered body parts must get involved.

Now, I am the Miley Cyrus of off-width climbing. A brief foray onto YouTube will reveal, by comparison, Miley’s incomplete mastery of the technique which takes the squatting butt-pump beyond its overt nastiness, transforming it to an artistic representation of nastiness. Like Miley, I’m still at the stage where I’m constantly challenged to recall that I just need to relax, that body position is critical, and that proper technique consists of mostly small movements. But at least me and Miley have passed the first barrier. We’ve gotten past the mortification, and whether or not we’re good at it, realized that nastiness can be kind of fun (if you’re doing it on purpose).

Finally, it becomes a chimney.