Close-up, the little gully evoked a strong sense of deja vu. The angle suggested that one might almost be able to stand up and walk it. The rock looked like a crocodile’s skin – all knobs and chunks with few cracks or pockets – and the few voids in the surface had formed from the erosion of yellow clay inclusions. I had been in this situation before, in the Canadian Rockies, the Tetons, the Cascades. It meant sparse and dubious protection for insecure climbing, with an ugly fall looming throughout.

The fresh memory of yesterday’s Eureka foray reinforced my unease. Just going into the mining country in Colorado’s San Juan mountains is sobering.  The road winds through acres of avalanche terrain peppered with jumbles of gray boards and rusty iron marking the eternal resting places of generations of abandoned avarice. Eureka itself stands for self-consciousness of our bitter relationship with the range. Once a small,  hopeful mining community the town is now a single building. The lone, windowless watchtower bears a prominent sign with the name of the town, placed there, no doubt, by the same sort of joker who might strap a party hat on a skeleton.

Yesterday was our second consecutive day at the ice climbs in the valley above the ghost town. The day before, we had been denied access to the longest climb in the area by an SAR exercise. Yesterday, we encountered a line of four parties on the same route, and we decided to trudge a bit further past the routes at the valley’s entrance. Around the bend and not far above, we found a lovely pillar of ice baking in the sun. The air temperature was cold however, and the ice looked to be in good shape from the ground, so we went for it.

My partner took the lead and ran the two pitches together. It went well until the very top. There he found the last few feet melted out and he could not get to the fixed anchor. Worse, in a fit of hubris, neither of us had thought to have him take the kit for building ice anchors. He put in two ice screws at his high point and I lowered him back to an intermediate ledge. He set up a belay and I set off to retrieve the ice screws and build an anchor in the ice to get us back down to the base.

Looking up at the situation, I knew that I should not risk falling. He had placed the two screws at the anchor properly. They had already held his weight on the lower. But the stainless steel tubes were basking. Many times, I had raced the process now at work on the anchor, placing another screw on a sunny climb before the last one heated up enough to melt loose. I arrived at the anchor and placed a back-up screw. Out of curiosity, I jiggled the anchor screws. They rattled in their holes, and by the time finished the rappel anchor, I could lift the screws free with two fingers. 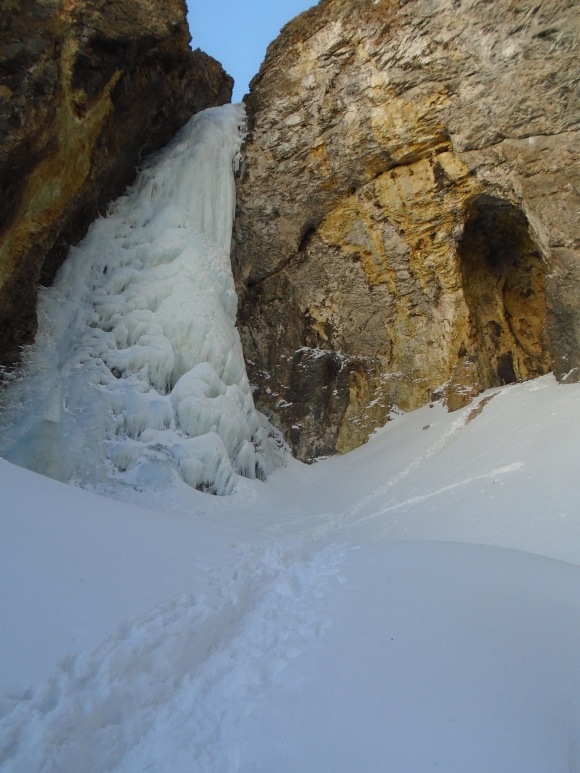 By the time we got back down, the crowds had migrated our way. We had another objective in mind for the afternoon, but our hopes were squashed on the road, for we found a fellow standing at the head of the approach trail just staring across the valley as if he were reconsidering something. He informed us that he had ridden a slab avalanche for a few meters down the slope below our goal.  My partner had his wife and young son waiting back in Ouray anyhow. 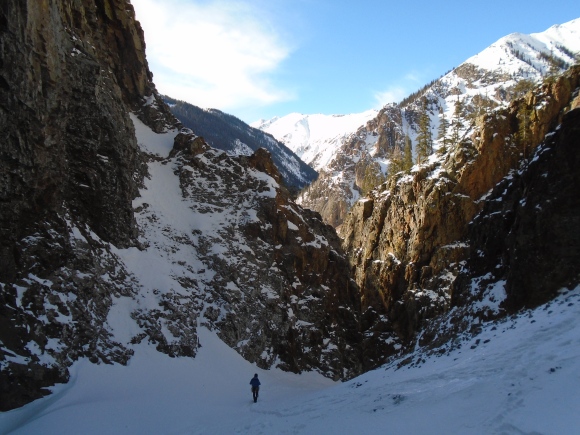 There had been angst around bringing the child, who was their first. He was a nidus of concern in some familiar ways. He was 18 months old and did not want to eat or sleep regularly. He clearly understood everything said to him, but his only bit of expressive language was the word “No”. Each morning, he spent a non-stop hour on Rube-Goldberg action. Cups went into other cups, packets of jelly were transferred from person to person and then into the cups, and then back to their original owner. All of this chaos worried his parents. It seemed so overwhelming that one could hardly imagine any organized behavior arising from it.

Unless you had seen it before. I had. I distinctly recalled worrying about how I could possibly teach my first child to speak. I had no training, and no idea where to begin. Nevertheless, the kid started to talk. He had inherited the talent for it. From an adult perspective, it looked like a miracle, because adults liked to think that they had, each and every one, invented the world – or at worst discovered it. That way, the adult felt more competent, and the world seemed more solid.

From the child’s standpoint, he was building a constellation from the inside out. He had his experiences – what he might come to call ‘sense impressions’ should he grow into a particularly deluded adult – and he had the dots and lines to mark and tie together those experiences, inherited in his nucleic acids, language, and culture. The dots and lines were powerful tools. They would allow him to develop at heady pace, mapping out massive territories, like language, on the fly.

His ancestral mechanisms  assembled his star chart in a blur, and if he was at all self-conscious in his adulthood, he would spend a lot of time figuring out how he got there, and what kind of picture he had made with all those dots and lines overlying the bright spots of his experience. It would be daunting and he might be tempted to throw his hands up and just call the dots and lines the truth, to give the mathematical, linguistic and philosophical accretions on experience an undeserved solidity, while relegating the experience itself to a dirtier, incomplete status.

My partner’s son would have an antidote in that case. He would learn to climb, and that would at least open the blinds on the relationship between the picture of the stars and the stars themselves. He would still have to look, but most people didn’t even get that chance.

Perched in the little gully, I saw the true landscape.

I was not motivated. I felt the burden of all those extraneous considerations which populated the slope with angels and demons instead of little edges and blotches of ice. I climbed back down and handed the sharp end over to my partner. He was motivated, and managed to lead the pitch despite some misgivings about the security of the climbing. I followed without slips or fumbles. It was sketchy, no question. We looked at the next pitch, but decided against it. It would be there when the stars aligned favorably, or even better, when no one was thinking about the pattern of stars at their back.